The Celeration Chart, (also known as a Lindsley Standard Time Series Chart), may look difficult to understand at first, but its format is required if we are to see the progress made after each session. The following explanations will make the chart much easier to read.

The Daily Chart shows 20 weeks (120 days) of the school year at one glance. Figure 1 shows the bottom border of the chart. Each vertical line is a day, and Sundays are heavier lines, which makes it easier to distinguish weeks.

Figure 1: The bottom of the chart, showing 140 days, with darker Sunday lines indicating the weeks. This chart has some data which ranges from 2 to 0 frequency per day. Note that an arbitrary 0 line is placed below the 1 line. 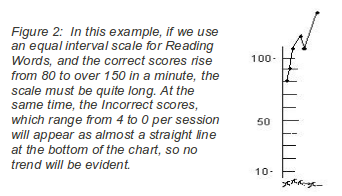 An add-subtract or equal interval scale.

Now the scale up the left.  It is designed to measure learning. All learning is exponential. This means that the first few tries occur haltingly (like an infant taking its first steps) but soon, they occur in rapid succession.  If we were to use a regular ruler line (a Cartesian or additive scale), we would need a long scale for such items as reading words (varying from 20 to 500 per minute), while reading errors would require a scale from around 10 to 0 per minute.  Placed on the same scale, one measure eclipses the other. 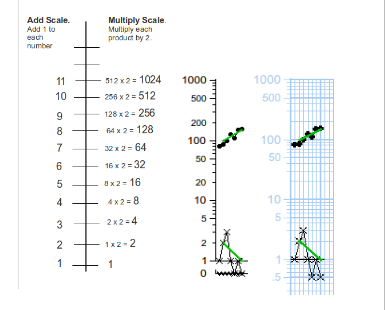 Figure 3: A consistent multiply scale is developed by dividing the ruler line into equal intervals, and assigning 1 to the first marker, then doubling each marker thereafter, so that the values rise exponentially (1, 2, 4, 8, 16, etc.) Now when the correct scores are plotted on the resulting chart, they are not spread so far and you can see the trend. The variation in the errors is now evident, with a clear  deceleration.  The chart grid is added to the chart on the right. Note that there are  horizontal grid lines for the values 1 to 10, but the lines are becoming so close together that for the 10 to 100 cycle, grid lines are only shown for  multiples of 10. Similarly, above 100, the grid lines are in multiples of 100.

On the Standard 6 Cycle Celeration chart, the scale up the left is Count per Minute, and the “one” line is in the middle of the scale.  (The number 1 indicates where a score of one correct or incorrect in a minute would be marked.)

If you are practicing a CyberSlate fluency, it is probably a one-minute timing.  We indicate the length of the timing with a short horizontal line across the day line. We call this the floor – the place a mark would go if there was a single occurrence of the pinpointed behavior occurred during the fluency.

The one-minute timing is an optimum length of time to concentrate on most skills. Other skill building fluencies continue until you complete the task (Paragraphs, Comprehension, Power Writer, Arithmetic Review). 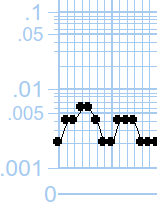 Along with showing your best score, the chart shows how many times you have completed this fluency each day. Look at the bottom cycle of the chart.  The lowest line is .001 which is the mathematical way to say 1 in a waking day (about 16 hours.) The horizontal lines above the .001 line can be described as 2, 3, 4, etc. times per day.

Here is a summary of some of the conventions we use to show information on the chart. 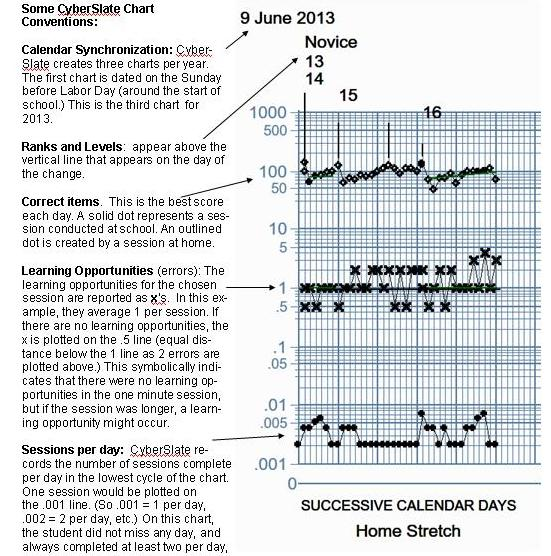 Four other chart displays are available.  Each chart is designed to give you one more aspect of skill acquisition. All of the charts are updated at the end of each practice session.

The Sessions chart uses the multiply scale, and it shows the last 100 sessions. The grid’s day lines are not evenly spaced, but depend on how many sessions there were each day.  This chart is the best way to see whether you are beating your score from session to session.

The D+ (Daily All) chart shows all of your scores for the day, instead of the best score. It reveals the variation in the scores.

The D* Chart averages the scores for the day.

The Times/Levels Chart plots the time of day that each exercise was completed. The chart beneath the times chart shows the number of times that fluency was completed in the day. (It duplicates the plot on the six-cycle chart.)